Usually when one hears "knock off" it puts the mental picture of cheap looking, shoddy materials, basically junk. One company aims to change that perception, at least with Transforming toys. Wei Jiang has two fantastic oversized Optimus Prime figures, and this review is for their Commander movie version of Optimus.

Other than having to personally add an Autobot Symbol on the chest, this guy could be mistaken for an official work. Based on the much smaller Evasion Mode Optimus from the Age of Extinction toy line, this guy takes that figure and not only supersizes it, but redesigns and enhances that already good figure and makes a Masterpiece in many definitions of the word.

Articulation is fantastic. Solid ratchets in most of the joints, and the plastic is very close to that found on official mass release figures. Paint and detail is beyond most figures of any toyline these days. Ankles are painted, subtle wiring is molded clearly, everything pops.

This guy is ginormous! Taller than most Masterpiece figures, this guy would scale very well with the Movie leader class Ironhide and Human Alliance figures.

Unfortunately, he towers over decepticon Starscream, so recreating the forest battle scene is not going to happen.

For accessories, he comes with two swords, a shield, an axe, his gun, and a face with a mouth. The swords and gun look great. The axe and shield I gave to my Rodimus figure, and it looks better on him.

This is a must-own figure for anyone not "morally challenged" by the idea of buying unofficial product. Everything tabs into place and feels great. I cannot recommend him highly enough. I hope Wei Jiang continues to prosper! 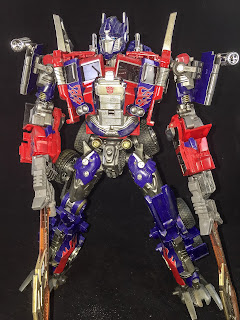 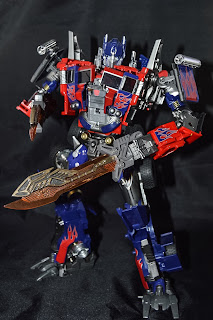