One of the most popular and enduring aspects of Japanese super robots is the combiner. Whether it be 5 lions or jets or mythological robotic sea creatures, it's been a recurring theme in animation. One of the most recognizable and popular combiners is the mighty Devastator. Six constructicons that unite into the ultimate destroyer. Over the years, he's had many toys, a few scenes in big screen movies, and even a starring role in a video game! All this attention makes him the perfect candidate for some third party transforming robot love!


The set I'm collecting is made by Generation Toys. These are somewhat masterpieces, but more like DX9 Carry than mp27 IronHide, in that they aren't  held back by the limitations of 30 year old animation and two-inch long toys, and represent the potential of the design, were it done today instead of 1985. Also of note, Generation Toys' Gravity Builder is an all-in-one combination requiring very little, if any, partsforming. The combined mode's arms are disguised as generators that connect to the individual robots as a flight-pack and/or portable battle station similar to mp-27's sled.

Right off the bat, you can see these are heavily detailed compared to their G1 counterparts. These are robust bruisers, full of articulation and worthy of a Decepticon symbol. Also of note, all the GT constructicons come with default "light-piping" that makes their eyes glow when in front of a light source. I dislike that, so all of my figures have had slight mods to paint over the eyes and gunmetal-black to cover the piping in the back of the head. 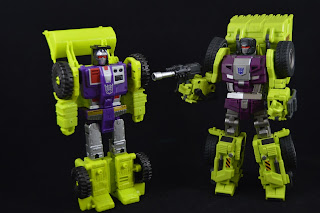 Scrapper:
First released, this is the leader, and is probably my favorite of the group. This feels extremely durable. Only real complaint is the hip skirts get easily lodged into the legs requiring digging out. They should have been a tad larger or have "breaks" preventing them from moving far enough back to get stuck. 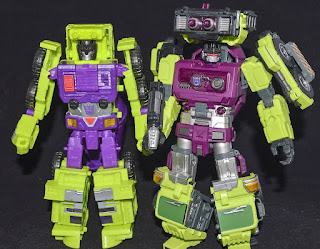 Mixmaster:
This deviates slightly from the G1 design, having massively armored arms, the mixing drum splits to reveal anti-aircraft cannons, and the face has a visor and mouth plate instead of a face, but he really does look evil. the transformation of his feet require a lot of tiny adjustments, so keep the instruction sheet nearby to make sure you get all the right tabs in place. 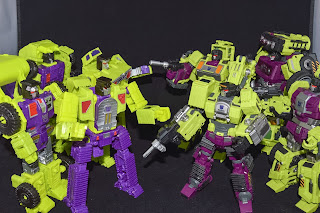 Scavenger:
Very close to G1, especially after installing the optional included head, this guy has fantastic articulation, and can achieve almost cirque-de-soleil poses! His excavator mode suffers from a giant hole in the back, but that is plugged by the aforementioned generator/arm piece. Normally a background character in the cartoons and comics, this version of Scavenger looks right at home at the front of any display! 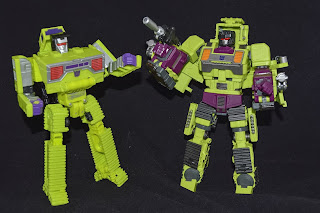 Bonecrusher:
Very different from the original, for the better, is GT Bulldozer, AKA Bonecrusher. Far bulkier and with a change in overal look, he's the least "G1" of his brothers. The blade pieces on his arms take getting used to, but they definitely add to his intimidating look, especially if you swing them around to form massive claws. 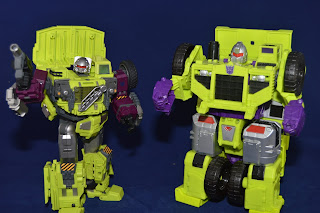 Longhaul:
Very richly influenced by his G1 counterpart, Longhaul, GT Dumptruck is a bruiser! Massively built like a wrestler, he's the muscle of the team. His dump truck mode suffers from robot kibble in the back, but the robot mode looks so good, you'll easily give him a pass. He is my 2nd favorite of the team. 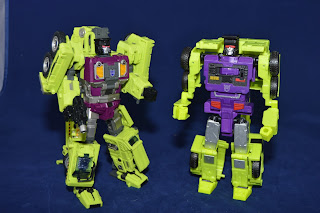 Hook:
With a few elements from G1, GT Crane is the weakest of the GT designs. The boom is a mess, the transformation is not as impressive, and the design lacks the same wow as the other constructicons. A very disappointing note to end on, but he completes the set. His shoulder pads flip up to reveal a series of guns and missiles. A better use for the kibble than many of the others in this set.

Final thoughts: As a team, they really look good together, especially among the others in my mixed collection of Masterpiece 'Cons. I haven't combined them, I hope to get another set in the future for that. These overall have been a good deal, and they really do set a new standard for combiners. 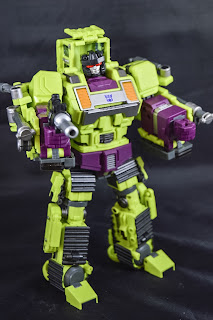 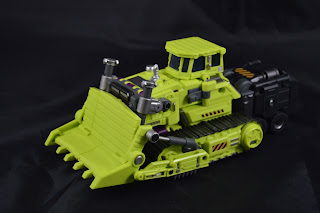 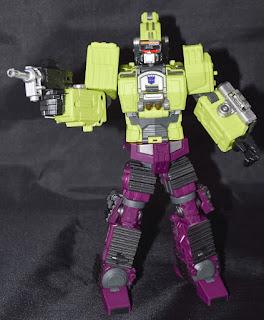 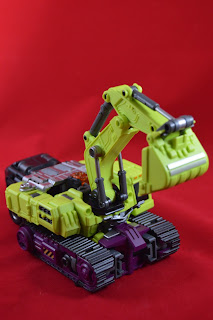 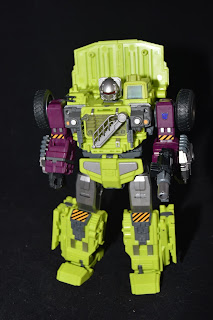 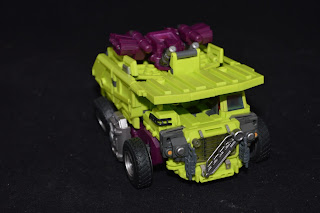 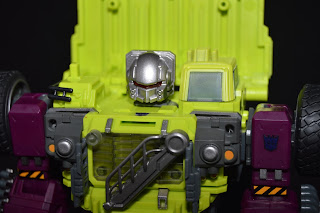 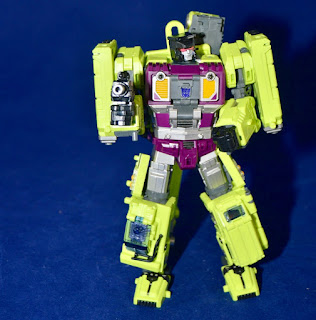 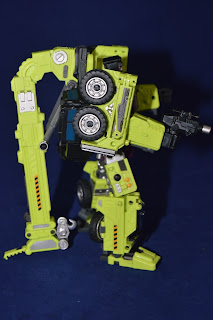 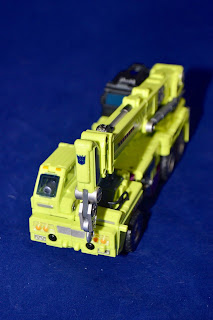 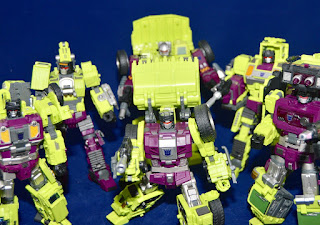 For a look at the combined "Devastator" Mode, click here.