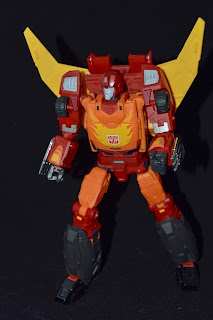 One of the most inspiring scenes in a child of the 80's movie viewing experiences was in the 1986 transformers movie when Hot Rod took the Matrix from Galvatron, became Rodimus Prime, and tossed Galvatron clean through Uncron's head to the blackness of space. As awesome as that scene was, Rodimus never got a decent toy that wasn't either a partsforming nightmare or a fragile mess...until now. 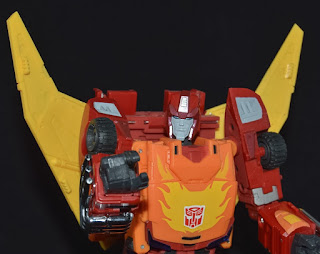 Dx9's Carry (from here on I'll call him Rodimus coz Carry sounds like he should be having a meltdown in a school gym, covered in blood) is a fantastic "ultimate" take on Rodimus, that fits in with the Masterpiece scale, even though he isn't quite the same aesthetic. Ultimate because he takes the soft curves and humanoid qualities of the season 3 character and gives it a season 1 edginess. Lots of sharp angles, a square jaw, and a great blend of manga-comics-style Rodimus and G1.

Where this figure shines, is in is sturdiness. This feels more like a 1980's quality transformer, rather than the delicate display pieces of many official and third party figures today. He's upper echelon materials-wise similar to Fanstoys and MMC. At no point during transformation am I worried of a crack or stress on the plastic. 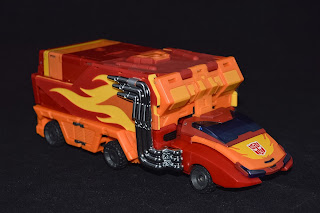 Space Winnebago- mode is clean and tight. Everything pegs into place, wheels roll, and there aren't any "why is there a hand there" angles. It looks amazingly good, even from below. 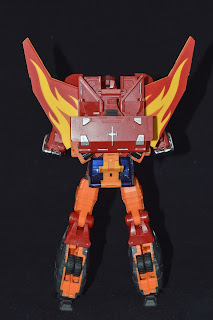 Robot mode is nice from all angles. Not a huge "backpack" and what backpack there is has friction joints and tabs locking it into place, so it's not a balancing nightmare. He is solid. Instead of the usual tiny little tabs, the chest and legs are held together by massive locking tabs, so at no point does floppiness enter the equation. 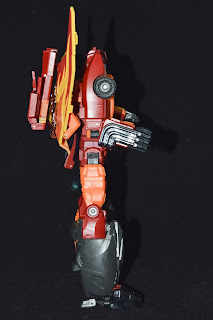 This version of Rodimus won my Figure of the Year for 2015. He's a figure that is a must in anyone's collection, and a great addition to a masterpiece display if you break up the the animation-adherence of the official figures with characters from warbotron, Fanstoys, or other dx9. 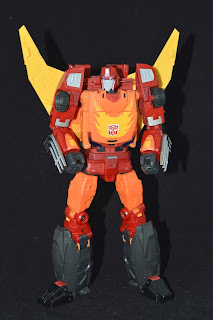