Part two of the KO seeker wars, this installment looks at KBB Starburst in comparison to the mass TRU release of Masterpiece Starscream. 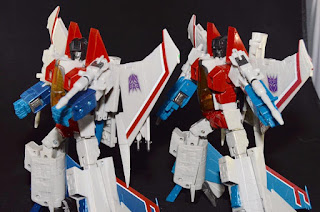 Coloration: With Starburst, there is a slight metallic look to the red of the chest area. This is really nice when you place him alongside Skywarp and Thundercracker, it gives him a premium look. The TRU version was flat red. Starburst has flat blue instead of metallic, and both TRU and Starburst have a bad case of the swirly gray plastic. Hopefully bb7's starscream, which is supposed to be painted white, will finally give collectors a premium starscream look from head to toe.

Overall, paint details on kbb are fairly good. There is slight softness to the wing lines, but it's not bad 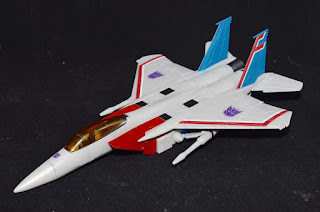 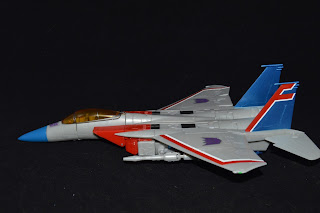 Material:  Kbb uses a softer, more forgiving plastic than bb7 or TRU. I don't pretend to know plastic compositions, but this just doesn't feel as "tough" as other Seekers. Kbb does, however, add diecast to the leg sliders, which adds weight and slightly counters the top-heavy nature of seekers,

Design changes:  There are a few obvious design changes on Kbb Starburst. Most noticeably, the hip/crotch area has vents and panels instead of being a solid piece as on the TRU starscream. Secondly, there is a mild hip swivel. Fans have long begged for this. The final major change is an extra port on the wings to add accessories. 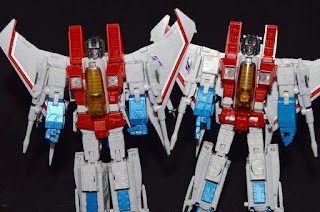 Now for the tough question... Should you buy the Kbb, or wait for Bb7?  For the price, compared to quality, I have to honestly say the Bb7 feels more like an official product. Kbb, while good, feels slightly more like the typical KO. It's good, and a fantastic value, including the regular MP11 Starscream accessories of cape, crown, gun, etc, but adds spring-firing missiles as well, but if you have an aversion to the swirly cheap looking plastic, the upcoming Bb7 might be the version for you. 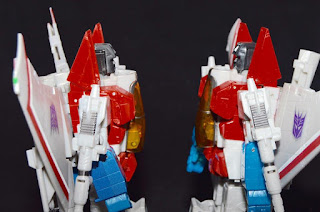 I do like the metallic flake in the red plastic, as well as the attention to assembly on the kbb. Sprue marks are a minimum, and the ratchets in the limbs hold poses well. 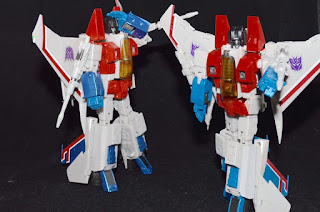 Comparing Bb7 Skywarp, Takara seekers, kbb Starburst, and TRU Starscream,  I honestly think Bb7 is the best value for money. Starburst is a little overpriced at $75-$85, and hopefully will drop to the $50 price range, which I feel is more in line with that toy's overall feel. Either way, you are getting a product that is a better cost/value ratio than the Japanese Seekers (and better qc than the last two releases) or more accessories and better qc than the TRU releases. 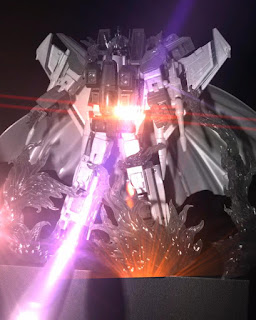