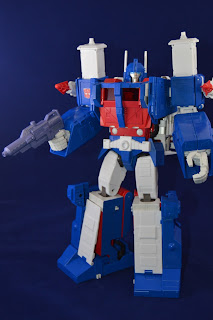 Normally I'm a hardcore season 1 Transformers nerd, but there are a few in seasons 2 and 3 that are impressive designs. One of those is Ultra Magnus. As big as a Dinobot but with the soul of a samurai, this soldier had his 15 minutes of fame in the 1986 movie (celebrating its 30th year as of this writing). Nostalgic pangs and a good eBay deal got me buying this Masterpiece version of Ultra Magnus as well as Hot Rod. 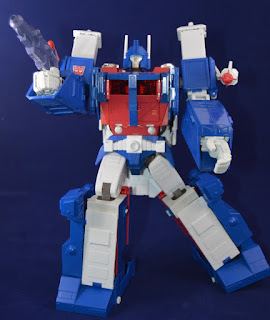 Ultra Magnus is a conundrum for me... as he's one of the most impressive, yet disappointing, official masterpiece I've purchased. He looks very spot on to the cartoon look. He's big, bulky, and overall very clean. Where he faulters is the range of articulation. A slight lunge is about as dramatic as I could get him without the use of supports. He's got the stoic pose down to an art, however!

Materials-wise, Ultra Magnus has a little diecast in him, something rarely seen since the mp10 reboot. Everything tabs in fairly solidly, and ratchets are strong enough to hold similarly sized figures without losing a click. 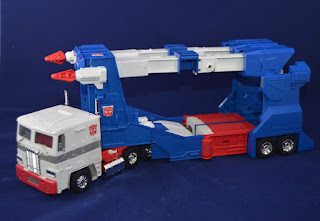 Transport truck mode is slightly weakened by the obvious thighs in the trailer, but overall captures the look very well, and is a very easy conversion process compared to many other mp characters. 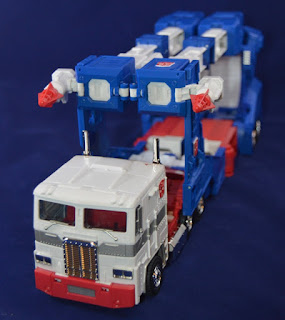 As someone who holds no special connection to the character, I am honestly glad I picked him up. He looks right at home alongside DX9 Carry and Tyrant, my other Season 3/movie characters. 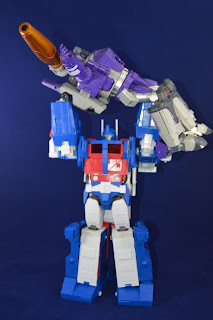 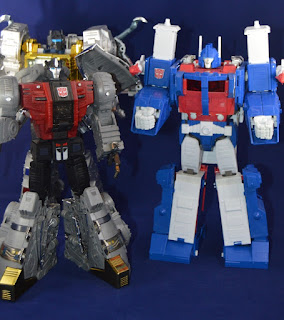 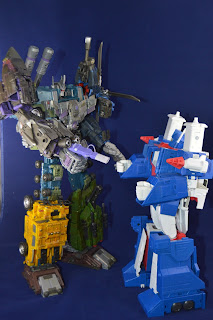 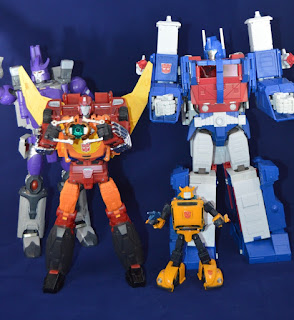