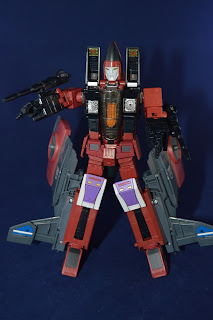 The Seekers and their clones have already received numerous reviews on this blog, so my views on the molds in general can be found there. Here, I'll comment on what's new with MP11-NT. 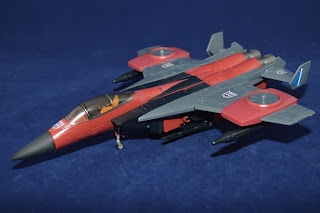 First off, as a jet, this is by far my favorite Seeker design. The VTOL turbines actually spin, the color of the jet is a wine red, instead of the dark maroon of G1, and it really adds a beautifully unique splash to the overwhelmingly cold colors of the Decepticons. Neatest function, and I hope it's made available to all the other seekers either by Takara or a copycat, is the folding arm blasters. Instead of tucking into the wing, these fold and hug the jet belly, looking really well done. 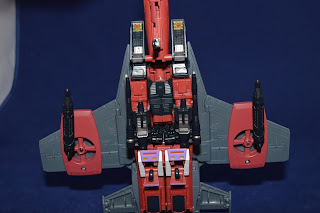 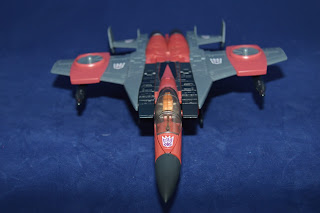 As a robot, Thrust is a mixed bag. Absolutely beautiful paint apps, no chips or misspray. The sneer on the face adds tremendous emotion and a welcomed change from the generic "bored" faces. Wings fold nice and tight, and the look is spot-on to the cartoon. 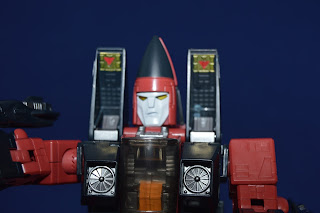 Unfortunately, my specimen surfers from a major case of the loosy goosies. The chest carriage slides freely, and the torso is very wobbly without any tabs to hold it together due to the new transformation. My Ramjet, which is very similar in design, is fairly tight even without tabs. It's a major disappointment and step backwards after all the progress made with Skywarp and Thundercracker.

For a display piece, I can recommend him, but for those that like to transform toys repeatedly, I'd urge severe caution, as after two transformations, I had to go into the figure with a screw driver to tighten parts that became insanely floppy. It's definitely not the expected end result of an official figure. 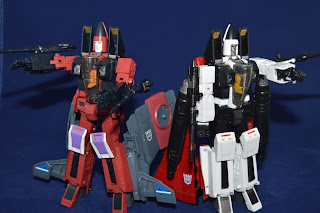 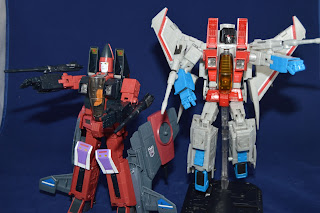 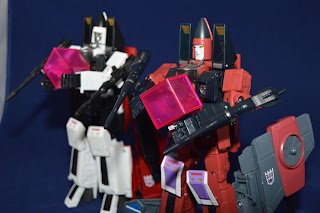 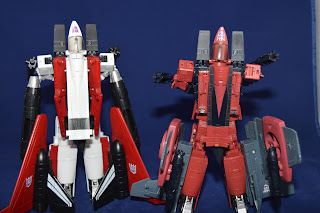