One of the earliest Transformers to get an official figure was the Dinobots' commander, Grimlock. For its time, it was an exceptional figure. Unlike other Masterpiece toys of that era, he was relatively straightforward to transform and had several gimmicks and a ton of accessories. He didn't scale well with anything, but he looked impressive. Fast forward to modern Masterpiece figures of a set scale, and suddenly the MP8 figure looks a tad tiny. Once you factor in the myriad of third party and ko figures, he suddenly is a borderline eyesore. 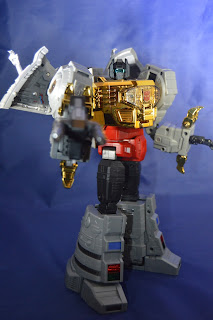 When Fanstoys helped launch the modern 3p Masterpiece concept with Scoria (aka Slag), they included a pair of boots to give MP8 a lift. This was a nice bandaid, but in no way was this a true fix. As more Iron Dibots were released, MP8 looked more and more archaic. To make matters worse, official figures took a decidedly cartoon influence, making MP8's amalgamation look even more out of place.

Fanstoys answered the fandom's cry for a hero in these troubled times. FT08 Grinder, their in-scale version of a fairly toon accurate Grimlock, solves many of the problems of the official mold, as well as finishing up one of the most ambitious and satisfying transforming robots teams in history. 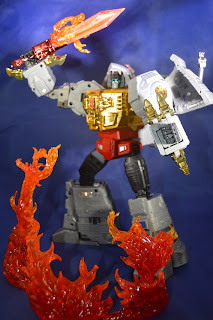 Let's look at robot mode... as usual, Fanstoys pays close attention to the details of the cartoon in replicating the animation model fairly faithfully. Some minor cosmetic changes (rumored to satisfy the demands of retailers) don't detract too much from the in-hand experience. As a former owner of MP8 and its oversized ko Reximus Prime, I can honestly say Grinder blows both away in terms of a solid figure. Everything locks into place, and there isn't a wiggle or wobble to be seen. Colors are rich, and articulation is everywhere with solid ratchets. 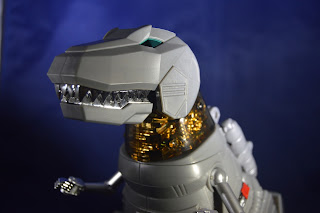 Transformation is fairly similar to MP8 with minor differences in the feet/tail and the chest/belly. Unlike Sovereign or the FT insecticons, at no time was anything so tight or ridiculous that I worried about a snappage. If only everything Fanstoys made was this good. 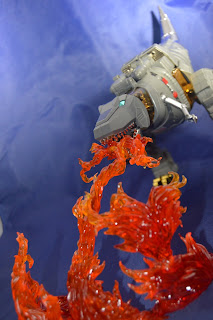 Dino mode is where this absolutely shines. No wagging tail or chomping gimmicks, but this IS a Tyrant Lizard King. Gone is the silly beer-belly and slender crocodilian head... in its place is a muscular killing machine and a powerful set of jaws not seen since Amity Island in 1975!
This is truly an impressive dinosaur mode. Far more anatomically correct than the doofus season 3 version of Grimlock, this guy truly represents the ferocious antagonistic warrior of season 1. 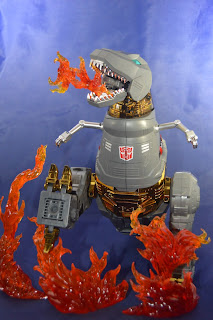 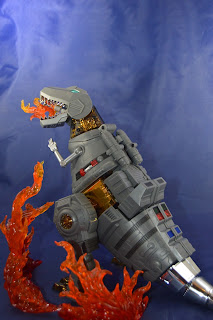 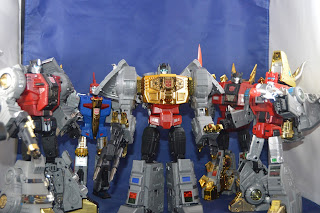 As a team, they look great. Slag shows his age, with a slightly different color gold and grey, but that will soon be remedied by the fixit figure of Perfect Fusion's Cesium. Overall, I'm very pleased. I really think Grinder is a must for any collector of the other Iron Dibots series. He is easily equal in build and quality as Stomp.