"Fanstoys, Chapter 1, Verse 1:  In the beginning, there was Quakewave, and fans said it was good. And then the Designers of Fanstoys said 'Let us create a team of Dinobots, starting with Slag' fans said that was fantastic, and each one progressively got better and better until they culminated in the near perfection of Stomp and Grinder." 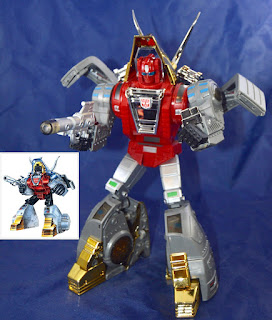 That's the honest truth for many collectors. Each Iron Dibot became more and more impressive, to the point where the original release, Scoria (aka Slag - or Slug for you sensitive Brits), didn't look nearly as good as the others in the set.  Fanstoys, with their really busy slate, created an offshoot sister company, Perfect Fusion, to give Slag a rebirth to fit better with his brethren, but at a less premium price by being more frugal than a typical Fanstoys project with less diecast and a plastic quality similar to Unique Toys' Combaticons. And so, Cesium was born! 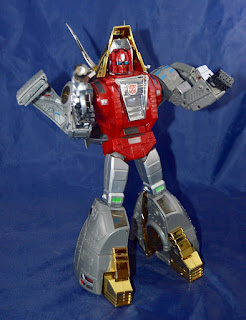 Slag is a fantastic piece.  About the same size as Grinder and Stomp in robot mode, he's a massively beefy 'bot. Equipped with a sword, gun, and different eye, horn, and leg options, there's nothing Slag can't do! Great articulation, decent paint job, and solid joints make this version of Slag a joy to play around with. 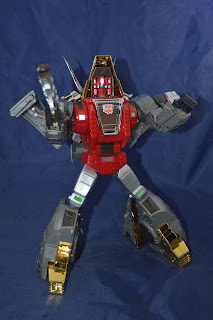 Transformation is similar in ease to Stomp and Grinder. straight forward for the most part, but with a little flare in the shoulders' steps. Almost everything tabs in tightly, except for a weird bit of tabbing that holds the back together. On my piece, it keeps popping out repeatedly.  I'm sure there is a bit of filing or something would fix it up. 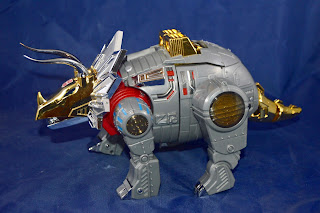 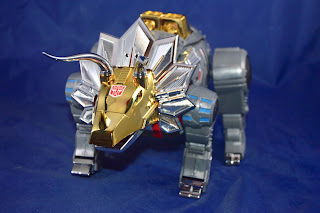 Triceratops mode is where he really shines, once you get the back to stick right.  He's full of personality! Rotund and oozing with fiery mischief, Slag looks like he's straight out of the cartoon.
If you can find it, I highly recommend grabbing the Tamashii flame effects. It makes posing him with other figures far more fun. 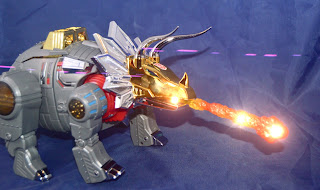 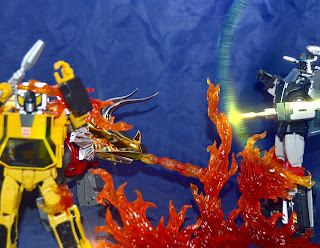 Trailbreaker: "What you need is a forcefield!"
Sunstreaker: "Hey, watch the paintjob!" 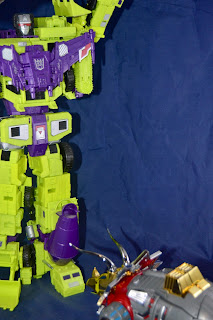 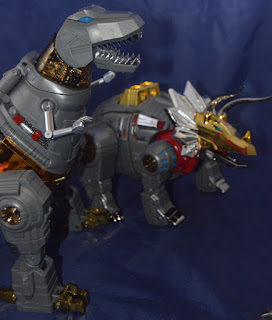 Now for the part most people are wondering... how does he compare to Scoria, the first Slag? In most ways, Cesium's far superior. In other ways, Scoria is the better. Overall, I'm happy to switch Cesium to the main desplay. Scoria will be retired, his ultimate fate has yet to be determined. 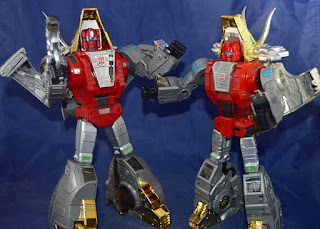 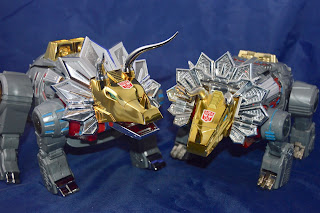 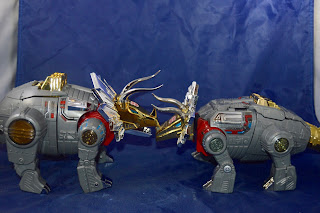 If you are looking for a triceratops for your Dinobot collection, I highly and strongly recommend Cesium. If you have Scoria already, then Cesium isn't a must-have fix.  It's not as big of an upgrade as that found with the switch from Cubex to Badcube Huff. It's really a lot of cosmetic fixes. 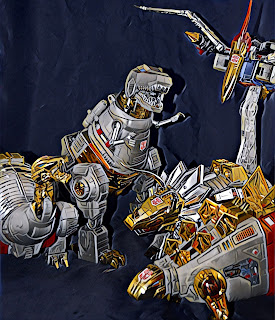 In closing, I can honestly say that as a group the Iron Dibots are a work of art!