"I am the leader of the future!" Maketoys Meteor AKA Masterpiece Cartoon Starscream 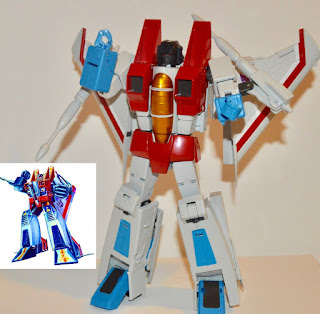 My favorite Decepticon, hands down, is the traitorous, treacherous, sniveling second-in-command: Starscream. My road to Starscream perfection - Masterpiece-style - has been rocky. It started with the Walmart edition of Masterpiece MP03, which was replaced by the Toys R Us edition of MP11 a decade later. Shortly afterwards, various KO companies copied MP11 and I finally thought I settled on the Yes Model version of Starscream... That was until I recently got Maketoys' built-from-scratch version of Starscream, Meteor.  Following Takara's recent path of animation accuracy, this new Starscream looks like he flew right out of the 1984 cartoon! 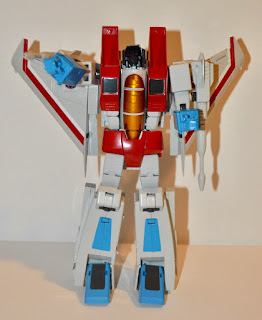 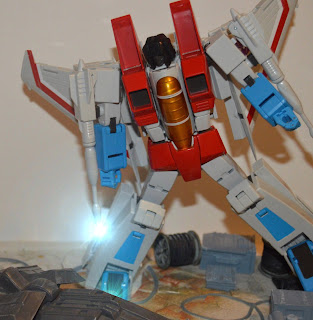 Articulation, build quality, and materials are all top notch. Balancing can be tricky, but he poses well. The chest, thighs, and perhaps more parts are diecast, giving him quite a bit of heft. It really feels like a match for MP36 Megatron and MP39 Sunstreaker.  Paint apps are clean, colors are bright, and nothing feels cheap. Transformation is a tad more difficult that previous MP Starscreams, but nothing that cannot be done in 10 minutes time. Unlike many other third party companies, Maketoys designed this to have many parts that easily pop off and reattach, so there aren't any snaps, stresses, or explosions. 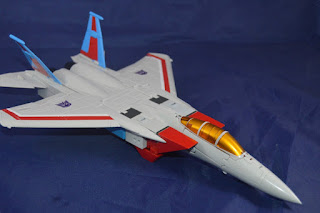 Jet mode is cartoon beauty!  Unapologetically comfortable with taking liberties from the real world jet, Starscream again captures the cartoon look perfectly.  Gone are the radar dish in the nosecone, pilot in cockpit, and many of the other real world details of previous releases. 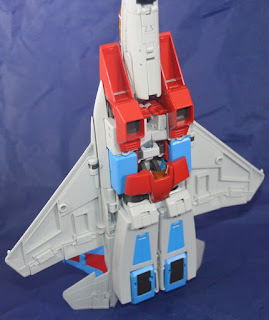 The underside of the plane isn't pretty, but everything tabs well, and nothing required much force or any other issues. For those that display their figures upside-down or dangling from a string, this belly might be a dealbreaker, but for me, I think it's overall very clean. 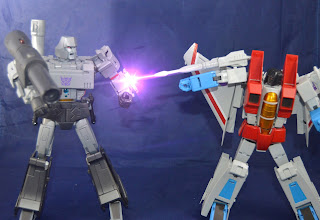 "It's time for new leadership Megatron!" 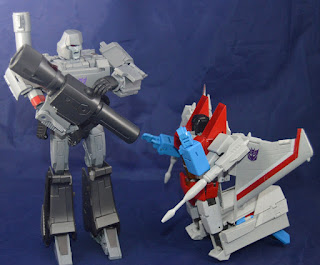 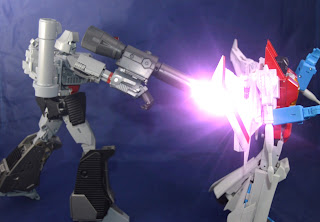 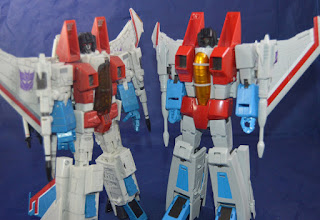 Slightly taller than MP03 or MP11, the newest Starscream also has smooth, curved legs and has a nice plane where the shoulders, chest, and head line up. Older Starscreams had the head and cockpit unnaturally elevated. 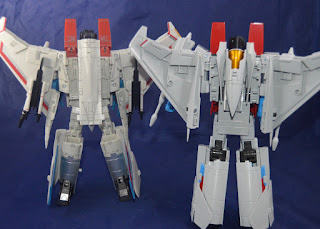 The back has been getting a lot of bad press, but in hand, it really doesn't look bad at all. All Starscreams have some kibble, and even the earlier versions had some gaps and unsightly issues.
Overall, I think all the extra plane "junk" has been minimized. 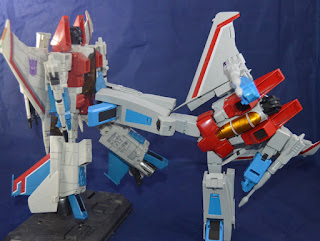 Besides aesthetics, the new Starscream really knows how to fight! Balance is great once you find the center of gravity, and the stiff articulation of the earlier releases just show how aged and "out of touch" they really are. 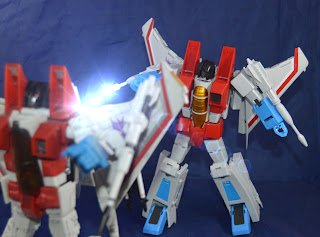 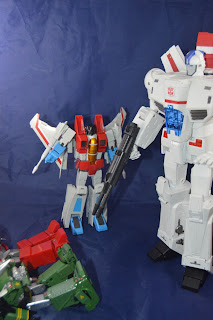 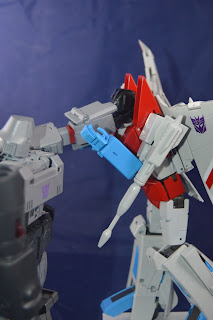 A fun accessory meant for Maketoys version of Megatron, Despotron, is the choking head/hand.
With some clever angles, other versions of Megatron can use the hand as well, for all your tyrannical needs. 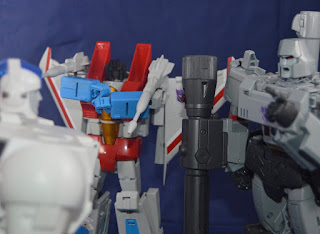 He really looks good posed next to MP36. I'd be surprised if Takara could make anything better. 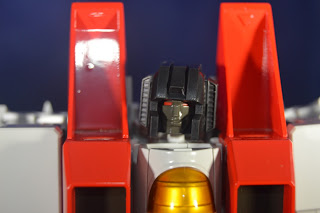 Overall impressions: this is the Starscream fans have been waiting for! Looks sharp, animation accurate, and a genuinely fun toy to play with!  He really feels like an official offering.  I'm looking forward to adding Maketoys Thundercracker and Skywarp to replace my MP11 molds of those as well.  That being said, I think I'm keeping my MP11 versions of the coneheads. I think they look brutish as is, and being elite henchmen for Megatron, I'm ok with their look. 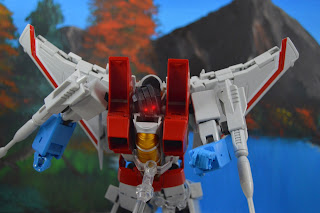 I 100% heartily recommend replacing any MP03 or MP11 if your funds allow it. This really is an enormous step up from previous figures.