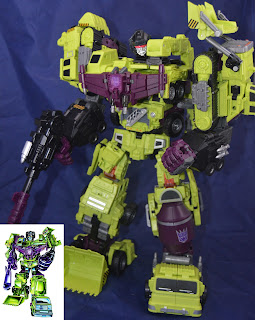 I previously reviewed the Generation Toys Constructicon set as my "go to" set for all things green and mean. I kept an eye out for price drops or decent KOs, and the former never dropped enough, and the latter was oversized or had funky orange windows. Finally a set came to market by Jinjiang, and at the same time as a killer eBay deal, so the stars aligned and I bought a set.

This review will cover the Jinjiang as a combiner only. I only transformed Scrapper of the set into his robot mode, to see what kind of simplicity I was dealing with. These things are light. They are thin. Two Generation Toys figures equal close to the weight of Devastator combined. If you are looking for a piece to enjoy, I'd recommend looking at Generation Toys. If you are like me, and want a Devastator to display, then this Jinjiang works just fine.

Since I have the GT set already, I used the combiner pieces from that to replace the Jinjiang pieces. This gives Devastator a slightly better looking chest piece and more articulated forarms. The forearms that come with Jinjiang do not have articulated fingers, just the thumb, and the elbow joint does not pull out to swivel like the GT version. 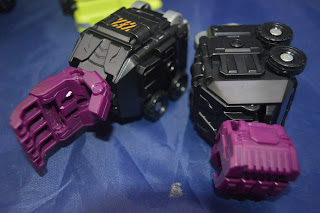 As I mentioned, these are simplified, so it's similar in build quality to regular mass released stuff you'd find at a thrift dollar store, just bigger. A lot of floppy joints, weak ratchets, and misaligned tabs and pins. I utilized the magic of the Kra Gl e ... errrr... Krazy Glue to solidify construction and make it a slightly better balanced 15" tall robot. Also I added some paint details, both in silver and black to various areas that were plain green on the toy. Gave him a little more "ba-da-boom".  Still not perfect, but for a few bucks, I'm overall pleased. 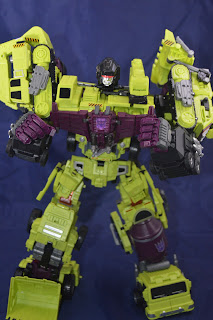 Forearms for GT version are heavier than the KO, so doing any arm raises is difficult, however he takes a boxing pose like a champ! Watch your audio receptors, Autobots! 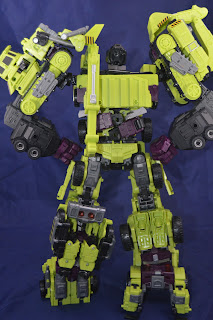 For a combiner, he's surprisingly clean from all sides, even the back. Not his best looking side, but safest if you are a tiny Autobot. 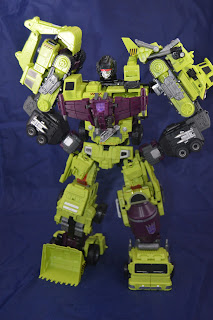 GT arms give you a lot of poses without the forearms falling off. The included arms allow you to connect and move right or left, but if placed in front of Devastator, they fall off.  That just enrages the big guy as the Autobots giggle and hide his arms. 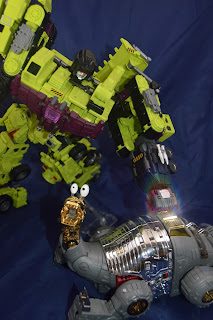 Gotta do the classics, man!
"Prepare for extermination!" 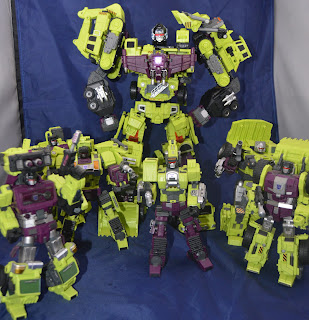 Good color matching between the original set and KO. 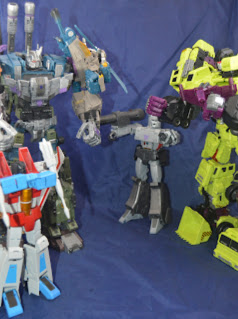 Clash of the Titans! 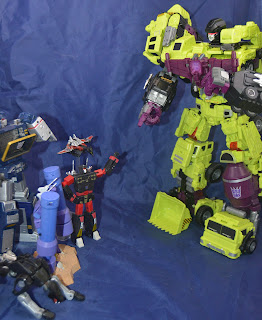 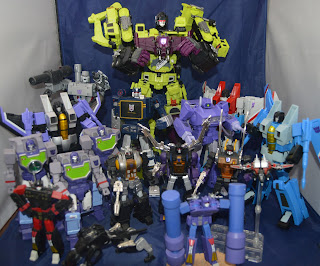 In conclusion, would I buy this set again, knowing what I now know? On an eBay flash sale, definitely. Less than $70 it's a good deal, especially if you are looking for a Devastator that will fit in a Detolf shelf.  This guy takes some elbow grease, and I plan to work on him a little more to solidify the hips a little, but overall he does look good. But if you really want to experience the Generation Toys molds in their glory, pick up the originals or from what I've heard, the Jinbao oversized KO is top marks if you want something in the +17 inches catagory.  For me, I'm glad I replaced the Combiner Wars Devastator with this. He's got the bulk and the attitude I've always imagined Devastator to have, and he's at a price I think is more than fair. 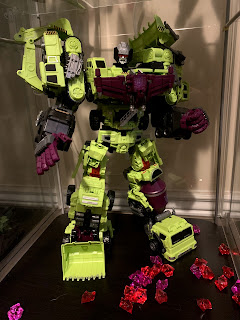 Added some paint details, in keeping with the G1 look.