Where’d that come from? Who cares, I’m more worried about where it’s going! Xtransbots Toro aka Cliffjumper

I like big trunks and I can not lie
You Autobots can't deny
That when a minibot walks in with an itty bitty waist
And a half car in your face
You get... Cliffjumper? 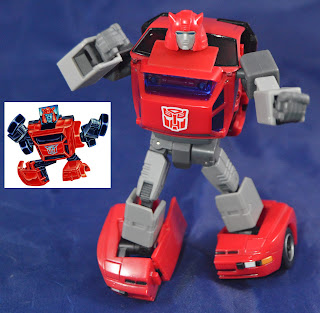 The story of Masterpiece level Cliffjumper is a sad, tragic tale of lies, deceit, crushed feelings and ultimately redemption. A few years ago, when Takara released Masterpiece Bumblebee, it seemed obvious to many that a retool into Cliffjumper was imminent. Instead, Takara chose to release a red Bumblebee in homage to the Japanese pennyracer toy that Bumblebee and the other minibots came from.

That left it to 3rd party teams to make up the slack. Several were announced, but one immediately came to market, made by Ace. Tumbler was a nice salve for the itch, but it was no cure. Fast forward 9 months, and Xtransbots and Mastermind Creations have released their Cliffjumpers. I chose to get Xtransbots’ Toro. While MMC has great materials and an impressive little bot, their proportions are a tad off to make up for a car interior gimmick. Xtransbots, while not perfect, looks to have tremendous fan support and a slew of creative minds developing fixes for Toro’s main “flaw”. 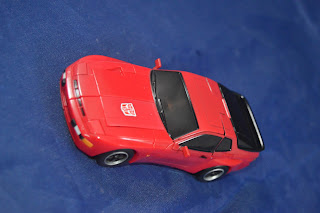 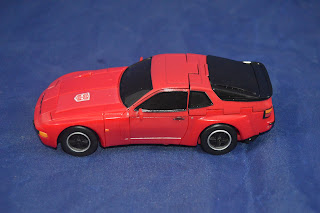 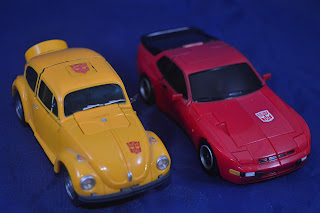 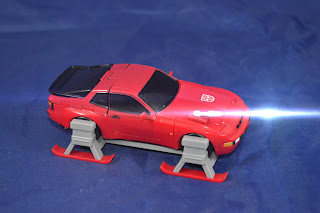 Car mode, Cliffjumper is a pretty impressive Porsche. My copy has pretty even paint job, aside from lights area, and overall feels very solid. Several accessories, including a gas gun, skis, and antenna are included just for car mode.

Transformation is hands down the best Xtransbots has done yet. Smooth as butter with few calories. I cannot say enough about how different this feels compared to nightmares like Apollyon and Boost who really are posable statues for all intents. Cliffjumper feels really solid as a toy during transformation.

Robot mode is a double edge sword. Cartoon accurate Autobot with a real world altmode really has its ugly truth shown here. Cliffjumper has quite a lot of junk in his trunk... in fact, half the car is accordioned onto his back. Much like Sunstreaker, Kup, Windcharger, and several others, it seems that in Transformers land, if it’s behind you, it doesn’t matter anymore. It’s really the only thing “ugly” about the design, but several ingenious collectors out there have developed a cartoon pack requiring a single pin removed to release the backpack. Transformation is still possible, as everything still tabs in perfectly. 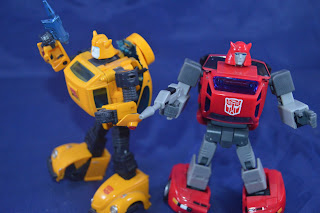 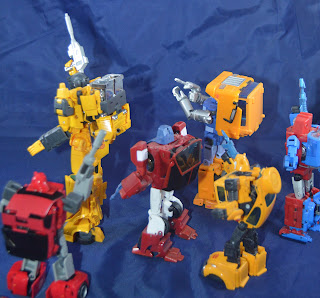 "Hut! Hut! There she was, just a walkin' down the street singin' "
"Doo wah diddy diddy dum diddy do"

Besides the backpack, Cliffjumper is done really well and echoes many of the official designs of Masterpiece Bumblebee, from the wrist gaps to the enlarged boat feet.  When posed next to each other, you would swear it’s the same company. Cliffjumper comes with a myriad of weapons and tools for his bot mode. Several blasters, a megaman-like hand attachment, and spears that combine into a staff. I remember two of the blasters from the cartoon, but the rest of the stuff I’m not sure of their origins. Still, it’s a solid collection of lethality (assuming he doesn’t miss). 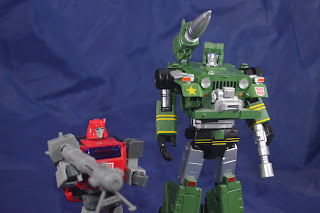 Overall, Cliffjumper scales really well among his 3p and official brethren.  Solidly built, and with a fan-fix for those who are anti-backpack. 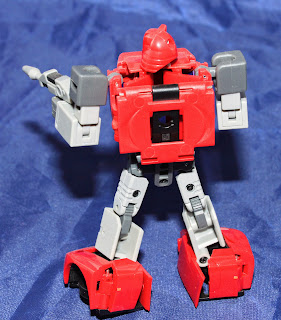 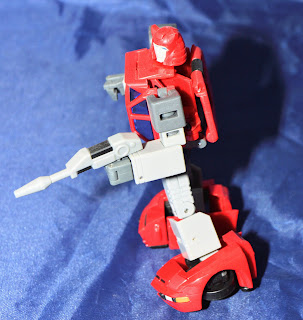