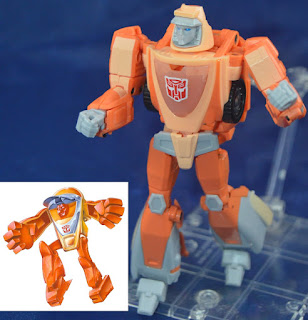 Arguably one of the most annoying G1 Autobots, Wheelie appeared first in the G1 animated movie in 1986. Being a hip, young Autobot of the mid 80's, he of course rhymed all of his dialog, used a slingshot, and was usually as good at getting others into binds as he was getting himself out of them.

One of the first Masterpiece-style designs by 3rd party team X-Transbots, their "Ollie" is a fairly faithful, if plain, take on a cartoon-accurate Wheelie. When first released several years ago, there were many breakage issues, flaking paint, and other flaws. It was considered a disaster. Xtransbots followed up with a 2nd issue, which fixed many of the flaws. This is a third re-issue, that fine tunes several of the fixes.  Still, Wheelie is a very tiny figure, and immense care must be taken when handling and attempting transformation, as there are lots of little panels and thin plastic.  This toy is famous for breaking on even the most careful of owners. Me, I'm happy with sticking to robot mode. 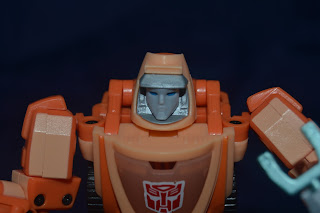 Not a "flaw" but a personal preference issue, I brightened the eyes and painted the "cowl" of wheelie with silver paint, to help define the face better from it's surrounding and give the eyes a more lively look. 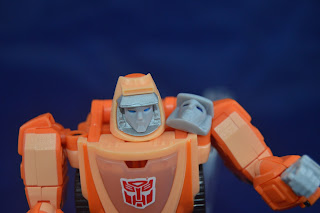 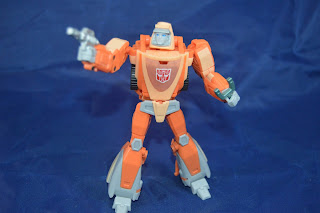 Robot mode looks great, and has stood the test of time rather well.  Armed with a slingshot and a pistol, Wheelie is ready to take on Sharkticons, dinobots, or throw Ultra Magnus a birthday party.
Paint is overal decent with little overspray and no chipping.  Colors are vibrant.  Articulation is decent, with the limbs attached to balljoints. 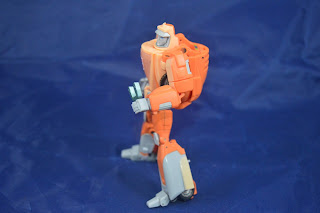 Profile is a tad thick, but shows a backpack similar to other Masterpiece-style figures. Everything of the car mode tucks in well. From the back, he's a little turtle-looking, but it's honestly not bad at all. 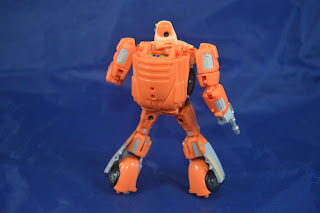 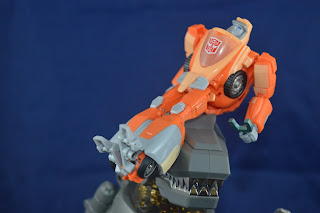 Like many Transformers, scale is depending on the episode and scene. A well known scene from the
cartoon movie shows Wheelie sitting on Grimlock's head. Not gonna happen well with these toys. 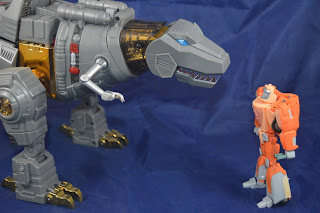 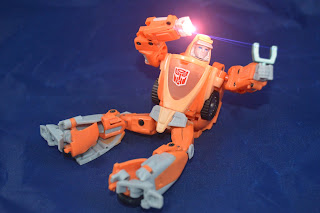 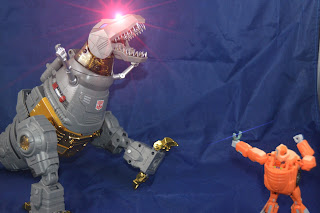 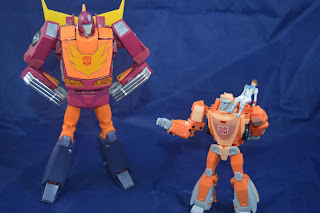 Wheelie does look good next to other season 3 characters. He's small enough to convey his "youngster" look, but still looks good next to human accessories like the Daniel that comes with Ultra Magnus. He's also small enough to make a good figure for the standard line as well. 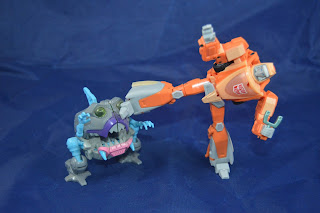 Overall, Wheelie is a very mixed bag.  As the only Masterpiece Wheelie, I have to recommend him as a figure for completists. However, even with all the fixes, he's still a fragile piece, with iffy design choices, so I can't recommend him for those that like to have Transformers to play around with.