My favorite comicbook movie of all time, despite many fantastic offerings from Marvel, Fox, Sony, and Warner Bros remains the original Christopher Reeve "Superman" film. With an innocence and simplicity unknown in today's desire to have everything be "a darker take on Hero X" or "Gritty with realism." Christopher Reeve gave off a certain boy scout charm and "Aww shucks" that made audiences believe in him. No matter how nasty humans got... whether it be bullies at a diner, terrorists in France, or nuclear weapons, Superman was there to inspire and show us the best of humanity.

A few years ago, I came across this 7" scale figure, and had to buy him. 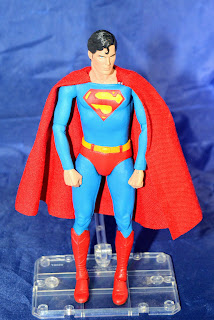 This looks amazing, but looks can be deceiving. Taking this out of the box, his leg fell off. It was sheered at the socket, only being held in place by the packaging.  Being the only one in stock at the store on clearance, I was forced to "take it or leave it" as Toys R Us would only return it, and NECA said "your retailer can deal with you" I had to use Krypton-strength Krazyglue. 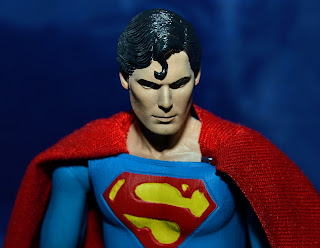 The face likeness is uncanny!  Absolutely razor-sharp and detailed. I just wish there was
a 7" Gene Hackman Luthor to go with it. 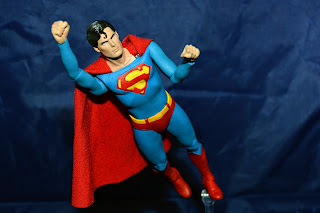 You'll believe a man can fly. 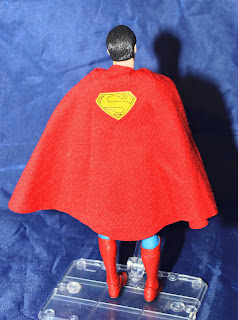 They even have the often-forgotten gold S on the cape.
Little details like this just make me beam with happiness. 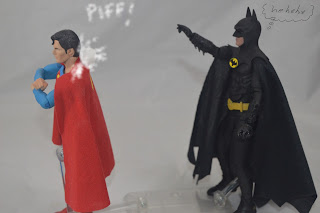 Little known fact... the Batman VS Superman feud began decades ago
because of a simple misunderstanding... Thankfully the heroes have
a safe word.... "Martha"