One of my most vivid childhood memories, in 1984, was a trip my family took to our local Best store (a chain store that competed with Sears at the time).  My father's goal was to get a Commodore 64 and dot matrix printer that was the package deal. However, he was a few dollars short of the threshold to meet the special financing requirements. He told me to quickly run and grab a Transformer toy from their huge display in the toy department.  Like lightning, my little legs burned down the aisles. I looked at the then towering display, and grabbed the biggest box I could see. This was an opportunity once in a lifetime and I wasn't about to squander it with a mere racecar. No, I grabbed Optimus Prime. He was on sale for "only" $30 (which in 2018 dollars equals about $72!) but since he was being packaged as part of the computer deal, my father barely blinked an eye!

Fast forward 34 years, and in the year 2019, Walmart released a commemorative reissue of the Generation 1 Optimus Prime toy. While this controversial release doesn't include Prime's trademark trailer/battle station, it does manage to keep it’s price more comparable with modern figures. 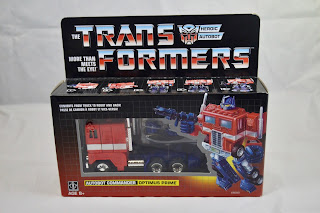 From the front you see the classic artwork that has now come to adorn T-shirts, lunchboxes, backpacks and dozens of other items. The viewing window is also large enough to give a pretty clear look at the famous Autobot Commander. 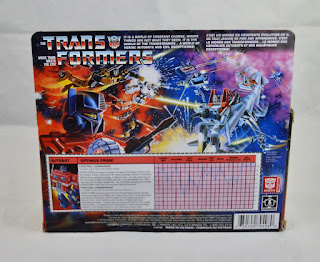 The back shows the vicious war of the Cybertronians. Also you get a bio card with Prime's stats and
batting average.  For a wink of authenticity, Hasbro even included an authentication mark that looks like the "Transformers points" one would clip from the box and use to mail in for Reflector. 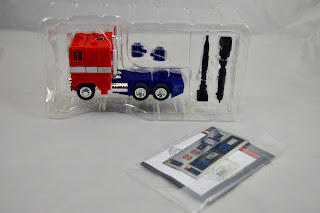 Inside the plastic, we have the familiar figure and accessories. Unlike previous commemorative Prime releases, we get two Ion rifles. One is the original G1 toy rifle, the other is a more cartoon accurate option. Also included are the instructions and a sheet of foil stickers. 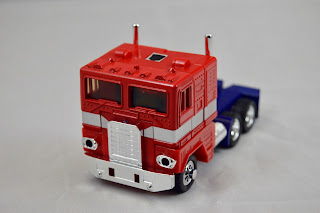 Truck mode, Prime hits most of the nostalgia boxes. The front of the cab is a painted diecast, the grill and bumper a rich chrome.  With a little diecast in the legs and feet as well, Prime is quite a hefty figure. On the top is also the body heat sensitive sticker that reveals Prime's Autobot faction to anyone who might have lived under a rock the past 30+ years. 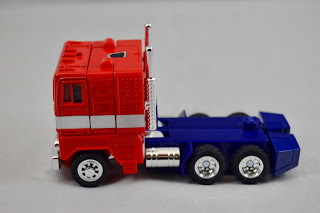 Overall, the truck is solidly made. The red of the painted metal on the cab is a close match to the red of the plastic on the sides. There is no chipping of any of the chrome, and it feels very similar to the original toy. 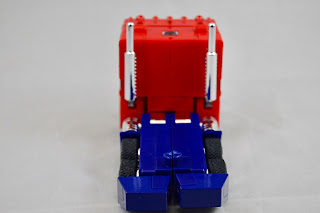 My Prime's only issue is a nasty set of marks on the trailer hookup. These are rather unsightly, and unfortunate. With as much care as they put into the rest of the figure, it's disappointing they allowed such a glaring defect happen. 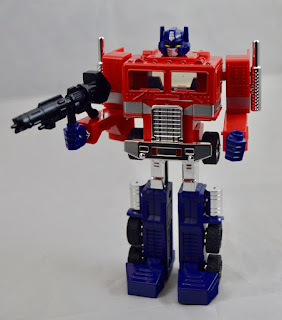 Robot mode looks as impressive and beautiful as always. Prime still manages to radiate with strength. Though limited by today's action figure standards, for his time, Optimus Prime was one of the most articulated toys available. Shoulders, elbows, legs, knees, and feet all have a limited range of movement. Prime's hands peg into the headlights firmly, and the rifle pegs into the hands well. 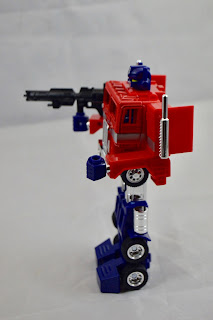 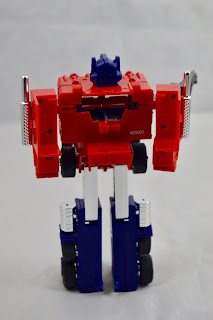 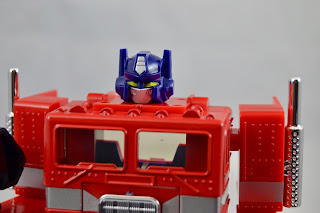 Prime's face is a slight let down, just because the eyes are painted in a weird triangle shape, instead of the long eyes of the original toy. It gives him a jovial look that seems a tad odd. By no means is it truly bad, it's just different from all the past commemorative Primes and the original toy.  Maybe Prime is happy because his endorsements payment came in? Maybe Prime saw the Bumblebee movie?  It's a modern day Mona Lisa's smile mystery. 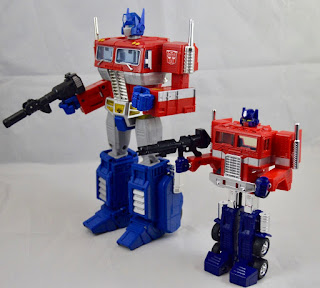 Compared to more modern takes on the Optimus figure, the original G1 design has actually stood the test of time rather well. Even today's toys follow a similar transformation to the original, the main difference being integrated hands instead of the choking hazard of pegged fists. Overall, he's a fantastic nostalgic piece. While having the trailer not included is a blemish on the toy's perfection, it's omission allows a nice little display piece that really won't take up a lot of room, and displays well with the previously released Hotrod and Starscream.