One shall stand, One shall fall.... Transform Element's OP Leader 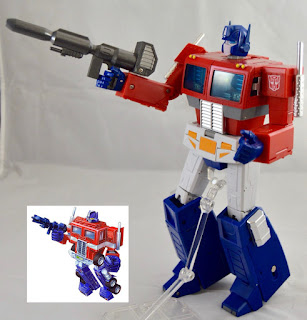 Around the time of Masterpiece Ironhide, the design of the official Masterpiece line changed focus from being an amalgamation of cartoon, original toy, and comics/art to create the "perfect" representation of a character to a more G1 cartoon faithful design. Gone were the detailed pistons in the legs, or the molded switches and levers in the arms. They were all replaced with smooth panels.

Since then, several prominent figures have been released in this new style, including Megatron, but the only choice for Optimus Prime was the older, more detailed version.  Takara recently announced a $450 cartoon accurate Optimus will be released August of 2019, but that's out of reach for a lot of collectors. Several third party companies have come to the rescue, and Transform Element is among the first, with their OP Leader character. 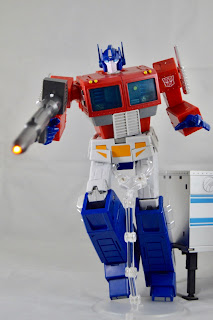 First off, this guy is a beast! He feels solid. Nothing about him feels like it's loose or going to come loose. Ratchets click loudly, and everything has a solid tab that plugs it into place, so there is nothing coming undone for anything short of directed effort. This guy doesn't have a trailer, but comes with a 5th wheel adapter to plug in MP10's trailer should you have one lying around. He also comes with his energy ax, ion blaster, matrix, and a lot of attitude!

The Transformation is tough. Lots of rotating, and barely sliding past narrow tolerances. Nothing felt like it was going to break, other than my fingertips. Truck mode could be also called brick mode, because everything tabs in TIGHT and all the weight is centered. It could definitely be used as a home security device. 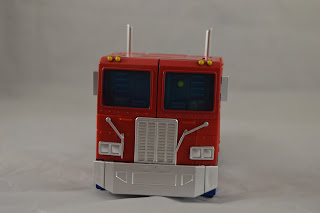 Yes, I realized AFTER I transformed him back and put him away that I didn't put the wipers up.
Oh well. Still looks awesome. 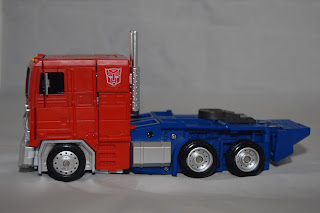 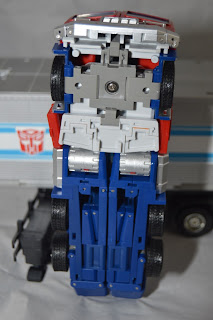 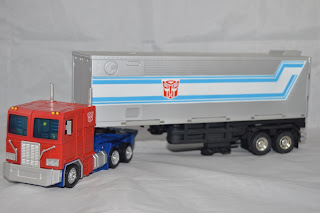 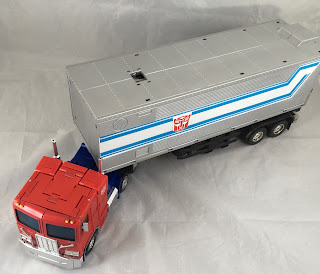 Once again, OP comes with an adapter to use the MP10 trailer. It snaps into the legs of OP and
the trailer just sits on top. Effective. 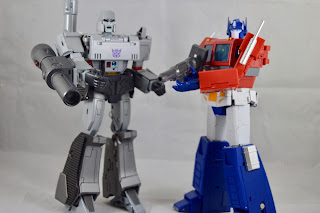 He scales perfectly with MP36 Megatron, and also fits the aesthetic.  They look wonderful posed next to each other. Subtle similarities, like the forearms and the hands, builds the impression that these were meant to be together. It's so uncanny, you'll find yourself humming "Happy Together" by the Turtles while posing them! 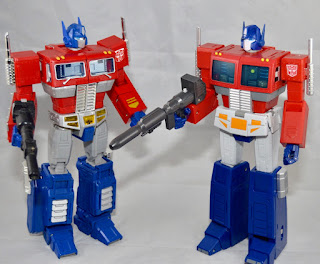 MP10 shows his age. With blocky long arms, legs, and a blue crotch, there isn't much "animation accurate" about him.  The new design softens the proportions, while still giving him the air of a powerful leader. 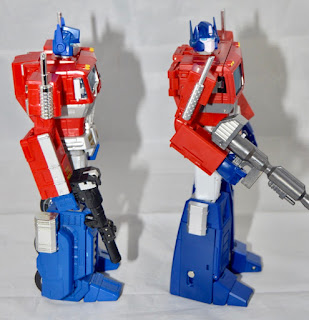 Profile shots show some of the major differences between the two. Gone is the humpback, as well as the blocky legs. Everything looks smoother. 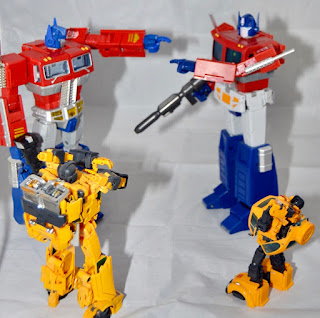 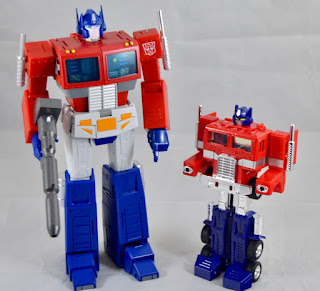 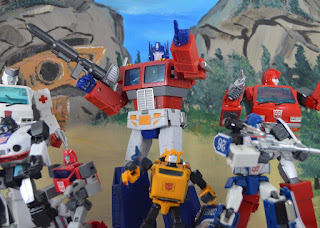 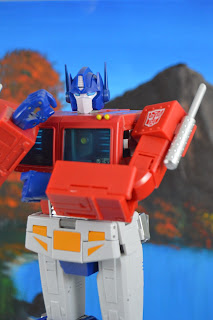 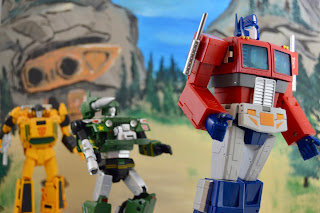 "Megatron must be stopped... No matter the cost! Autobots... cue my dramatic music!" 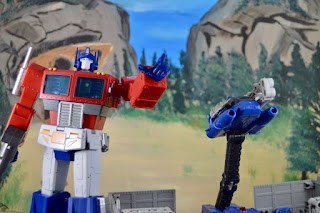 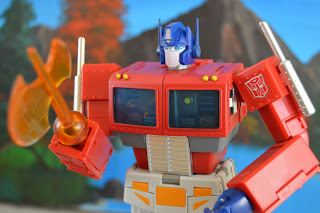 OP's energy ax looks fantastic. It doesn't have the little spikes all over, and looks more organically attached to OP compared to the spiky blade of other Primes. 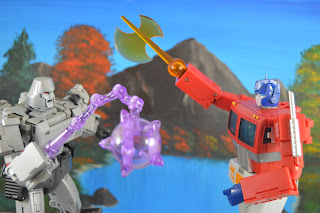 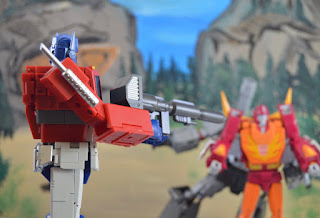 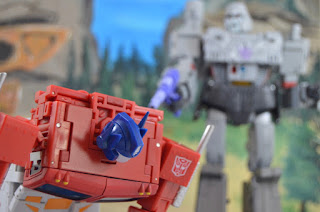 "I would have waited an eternity for this... It's over, Prime!" 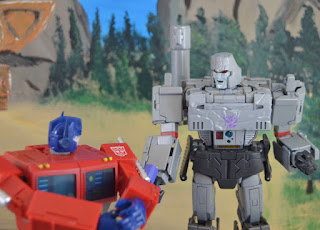 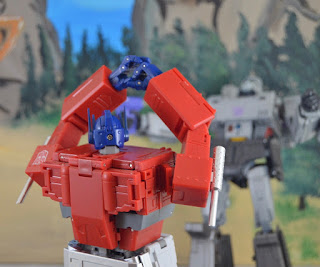 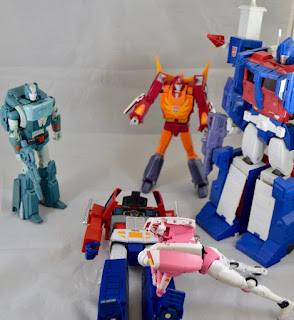 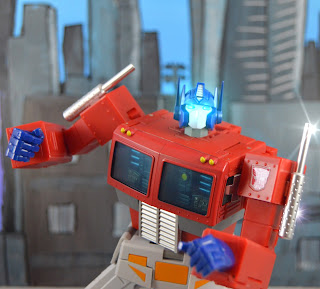 I highly recommend Transform Element TE01 OP Leader. He's a fabulous figure with very few issues other than a complex transformation (several videos showcase it... and it's a migraine inducer!). For a fantastic cartoon accurate bot mode that fits in with the likes of Maketoys, official Masterpieces, and Ocular Max figures, this guy really fits the bill almost perfectly. He's fun to pose, and looks great. 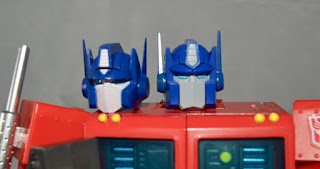 Transform Element has released a new version of the figure, with some significant changes to the head sculpt, and some minor physical differences to the rest of the figure. For buyers of the original version, they offered a free (minus postage) upgrade head. 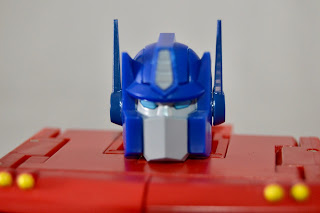 Huge improvement! One of the ears on the new head had a huge gash in it, but I swapped out the old ears with no problem. The new face is painted gray instead of white, and has a squared off faceplate and better helmet, giving Prime a more mature look. Very similar to the 1986 movie and the official MP44 3.0 look. Megatron: "Prime! I see you got a facelift! Did you get a personality upgrade to go with it?" 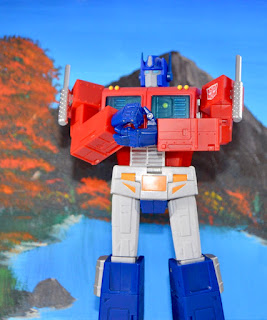 "Dang it! I just remembered I forgot to feed the Dinobots before leaving!" 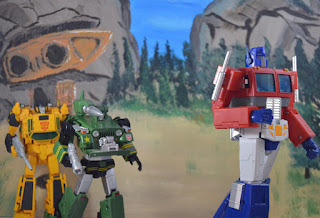 "Autobots! Form a conga line behind me! Let us join the battle in style!" 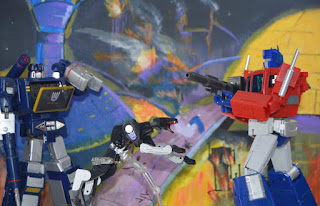 "Soundwave, don't you know all pets should be on a leash when out in public?"