By the Power of Grayskull! Mondo Has the Power! 1/6 scale He-Man. 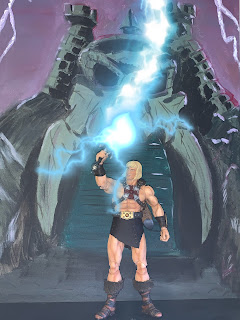 My favorite cartoon of 1983, He-Man and the Masters of the Universe was amazing!  The toys were as legendary as the cartoon.  It's been 36 years, so it's about time for He-Man to grow with his original audience. The result? MondoTee's He-Man. At 1/6 scale, He-Man stands at almost 12" tall and has amazing detail. 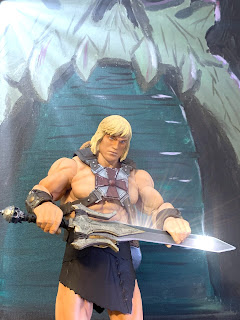 All the weapons and armor show weathering and a realistic finish. The powersword has the Grayskull face, the classic toy/animation design, and is solid. Nothing about this figure is flimsy.
Joints are extremely tight. Thankfully, the toy is well made, so moving the joints to "break them in" doesn't feel like it will wear out out or damage the toy. Paint is fantastic. He-Man's muscles have several tones of shading, and almost glistening finish, really selling the ready-for-battle look.

The sculpt overall is fantastic. He's not 1983's He-Man (but unfortunately has that option), nor is he the 200x or Dolph Lundgren version. He's a re-imagined blend of all versions of He-Man, with some new elements thrown in for good measure. His hair is atrocious, but that's been a staple thing with all He-Man universes. 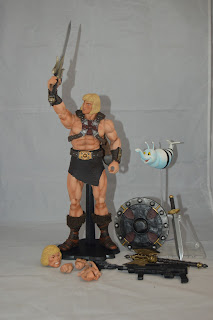 He's got tons of accessories. Several blasters, a shield, battle axe, short sword, stand, and an array of hand options. 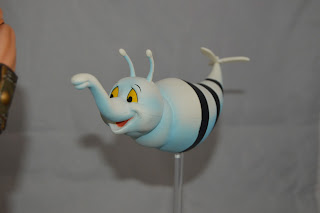 The Burbie, from the episode "Double Edged Sword" is an accessory, although I don't really know why.  I can think of a million things I'd prefer before this. Alternate hair styles? Orko? Red cape from the movie? Nope. A balloonephant. 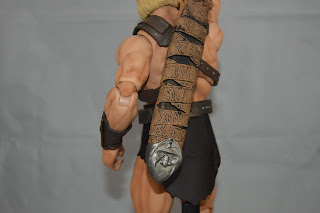 One of the details that makes me giggle is the Battlecat helm on the scabbard. It's a tiny detail, but really well done.  Makes me sad to think a 1/6 scale Battlecat will almost certainly never be made, unfortunately. 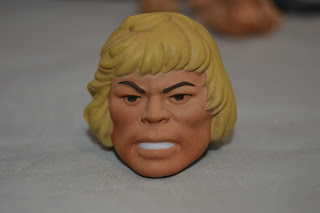 And speaking of misfortunes, Mondo includes this retro head. It's positively hideous! It might have been a viable option if they did better paint apps, but as a pure retro head, it looks totally off such a detailed body. 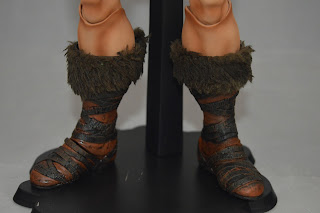 Speaking of details, the boots are painted, but it looks almost leathery. The trim of the boots even have a faux fur! Mondo shows a lot of pride in their work with this release. 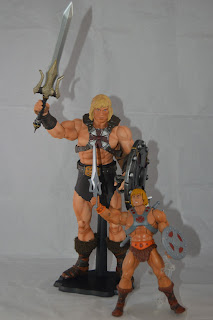 So many elements borrow heavily from Classics line from Mattel. If a new He-Man cartoon were to be made today, I could easily see this being the design. 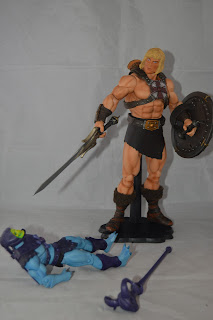 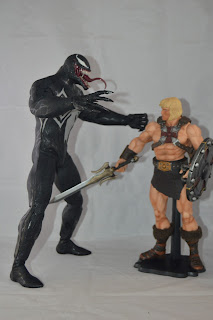 He scales perfectly with other 1/6 scale figures. Venom is quite a bit larger than other 1/6th scale, but He-Man doesn't look the least bit nervous confronting a symbiote.

The quality of this figure makes me anticipate the upcoming release of Skeletor and the other Masters. Mondo also have shown prototypes of Faker, Man-At-Arms, and my personal favorite, Mer-Man... so hopefully this line lives on to have Beastman, Trapjaw, Teela, and if there is true power in Grayskull... A 1/6 scale Battlecat!!!!!!