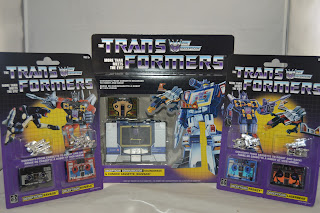 Following the success of the previous G1 reissues, Walmart and Hasbro team up again to release Soundwave and his minions.  Like the other reissues, these do a fantastic job of twanging the ol' nostalgia heart strings.  These have all the look of their 30 year old predecessors, but without the peeling, fading, and brittleness that comes with age.  Because the figures are on cards, I will not be reviewing the two packs of cassettes. They do look fantastic in their packaging. 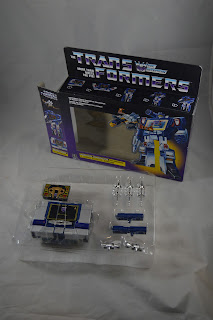 In the 80's, Soundwave was packaged in Styrofoam. Today, it's the basic plastic shell of almost all toys. Still looks great, and no little chunks of white "snow" floating about. 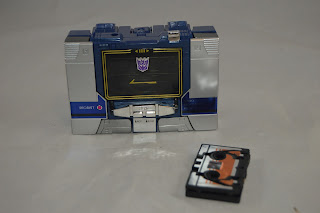 Cassette mode looks great. Stickers are very vibrant and everything feels good. A little scuffing on the chrome buttons, but that was on all 6 of the figures I saw at the store. Probably from being tossed together in large totes at the factory. 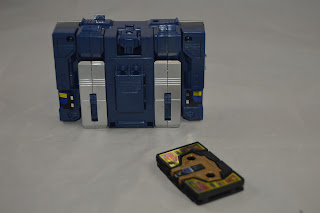 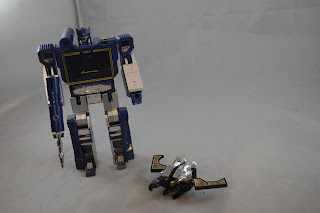 Robot Mode is simple, yet still beautiful.  The Decepticon that was loved by almost every kid in the 80's, Soundwave still amazes me by how functional the design still is, by modern toy standards.  He really is amazing.  Buzzsaw, the condor, looks great as well, but his back rockets have been slightly modified to meet modern choking hazard restrictions. 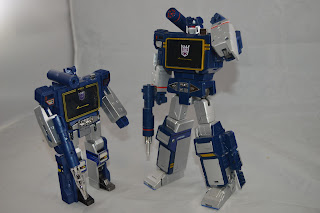 Compared to their 2012 Masterpiece counterparts, these two hold their own rather well. 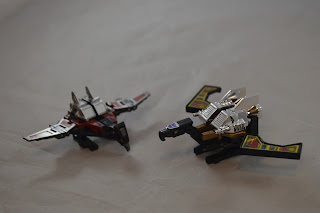 Overall, this is a great piece of pop culture to own.  He looks great displayed in the box or out.