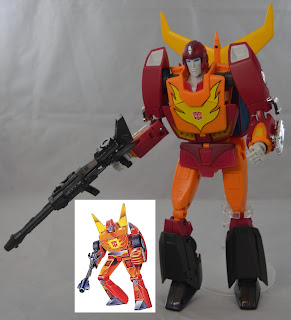 I've never been a fan of Rodimus Prime, due to his role in Prime's death, as well as his overall annoying self-doubt and whining in season 3.  I briefly had the TRU release, but returned it when scores of the figures were still breaking. I later settled for a third party release that was more manga-inspired but was a better toy. Wasn't a big deal, since I didn't have any other season 3 characters at the time.  Fast forward 4 years, I have a few more season 3 characters, and the Masterpiece line has switched to full toon designs. My manga Rodimus was a square bot in a well-rounded collection.  To answer my needs, Hasbro re-released Rodimus Prime, this time supposedly fixing the many issues the figure had been plagued with for 8+ years. Found a good price because of a damaged box, and decided to take the plunge and keep it this time. 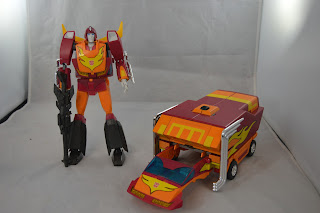 Overall, he feels fairly solid. He doesn't feel as fragile as previous versions. I wouldn't be rough with him, however, because he's still got lots of thin plastic pieces holding him together. Since I'm more than happy with not transforming some of my robots, I figured Rodimus will be forever "locked" in his Rodimus form.  20 seconds and slight adjustments out of the box and voila! He is Rodimus Prime! He comes with his 7/8 altmode partsforming shell/trailer, a buzz saw and blowtorch attachment for his arm, and two guns that combine into a sniper rifle. 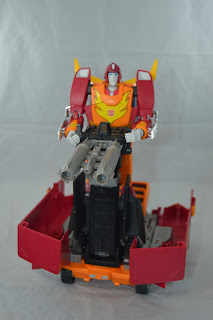 The trailer unfolds to be an anti-aircraft artillery platform. Unlike the teaser images of the re-release, this is not painted silver inside like the pics. It's a bland gray. 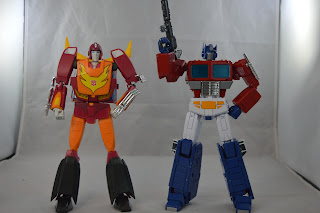 Next to MP44, he looks great! Simple details really look clean together. Being a design as old as it is, Rodimus lacks much of Optimus' fantastic articulation. 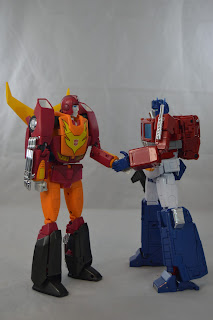 Because of the Hotrod to Rodimus gimmick, Rodimus has a few issues, still, including a springy skullcap so his profile is hindered slightly. Still, looks phenomenal. 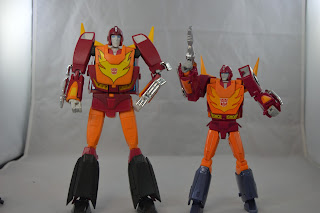 MP28 is the official Hotrod re-release, but I swapped that out for Fanstoys' Hoodlum. They look really good together. Actually better than the MP28 version. 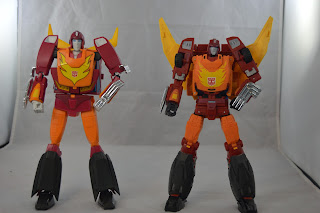 DX9's Carry was my Rodimus for the last few years. Still an amazing piece, but just didn't have the aesthetic I felt I needed. 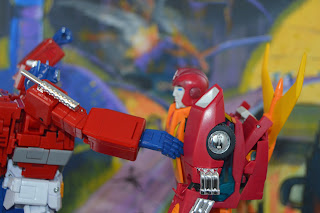 Optimus: "It's your fault I was killed!"
*shakes Rodimus profusely* 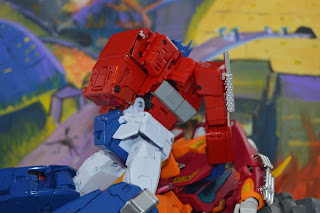 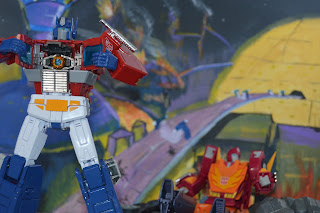 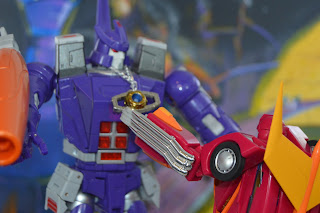 Galvatron: "It's a pity you Autobots die so easily!" 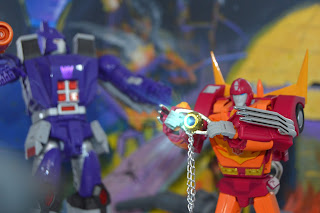 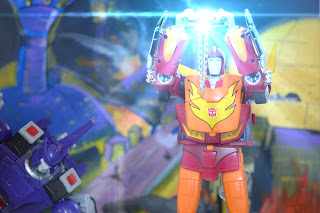 "This is the end of the road, Galvatron!" 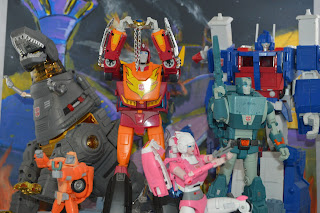 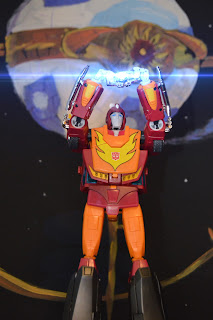 He's very pricey, for what he is, but still the most cartoon accurate Rodimus Prime. He fills his niche nicely, and I'm glad he feels slightly more solid.