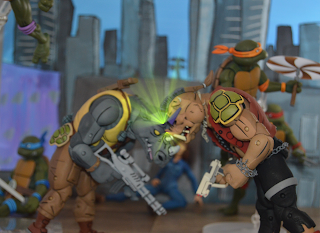 Neca's 2nd wave of cartoon accurate Ninja Turtles masterpieces have been released, and the figures on everyone's chase list are Bebop & Rocksteady, the Shredder's brain-dead henchmutants. Neca has knocked the animation model look out of the ballpark, over the stadium, and into the adjacent neighbood! 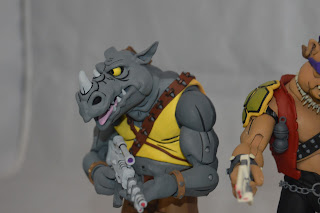 These look fantastic. Mouths open a little,  different hands allow a variety of poses, and they really look stupid (in a good way!). Tons of subtle details. Bebop's shades are removable, Rocksteady has his shoulder knife (not removable), and Bebop's chains are actual tiny chains, not molded detail. Of the two, Bebop is the absolute standout! 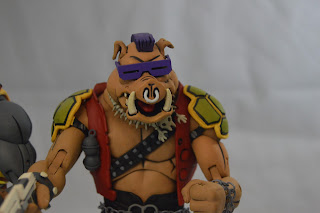 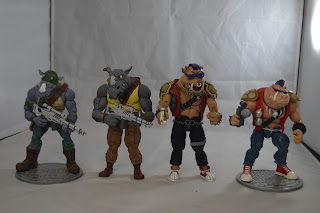 Compared to earlier attempts at "collectible" versions, the Neca team really blew away the competition. I could never get my Playmates Classics versions to stand without their displays. Neca stands just fine, but all tip over at the slightest breeze. Definitely not something to display under an air vent. 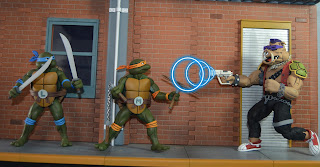 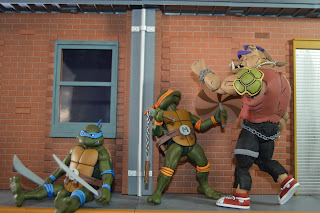 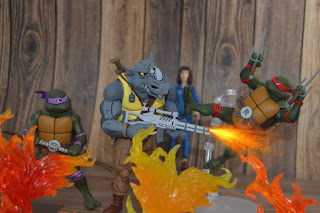 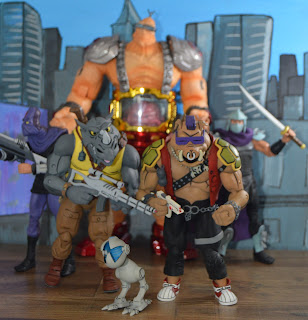 These fit in well with the other Neca TMNT releases, and will probably get the pixelated "arcade look" in the coming months for those with the Arcade Game sets. One thing I really must thank Neca for, is that they included them together instead of pairing each with a Turtle repaint, so we don't have to double-dip for the set. These are fantastic pieces that are a must for anyone who is a TMNT fan!