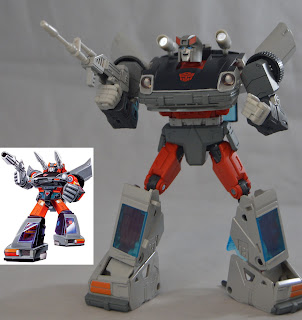 Hasbro/Takara has been trying to retrofit some of the earlier Masterpiece figures with livelier paint and a more animation accurate look when necessary.  MP-18+ is their reboot of Bluestreak, which originally released back in 2014. With a lighter gray paint, blast effects, and a new face sculpt, this is the version you'll really want.

Fairlady mode looks really good. Only issue is that the back quarter refuses to tab in flush. There is always a tiny gap. In hand, it's not horrible, but it's still there. I looked for whatever was keeping it from closing, but everything looks fine. Oh well. 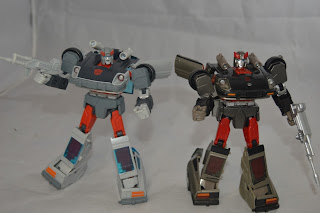 Compared to the original MP-18, the animation head sculpt really shows a lot more personality. You have the choice of the stoic face, a grin, and a scowl. Paint looks a lot better in the lighter gray. 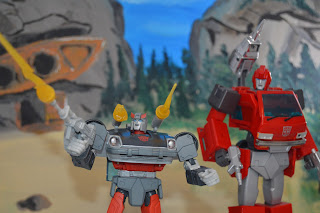 Ironhide: "Um... Bluestreak, you DO know the Decepticons flew away 3 minutes ago...?"

Blast effects work great on his shoulder cannons as well as gun. It can also attach to several other autobots' weapons. I really hope the blast effects become standard on Masterpiece figures. They add quite a bit of uniqueness to the characters.