DC Collectibles released an exclusive Gamestop series of 2pc sets based on the animated movie of the same name. If you haven't seen it, I highly recommend it.  These figures feel similar to Neca product of 10 years ago. To put it plainly, don't buy these as playthings.  These have a very soft plastic and thin pins that are begging to break. 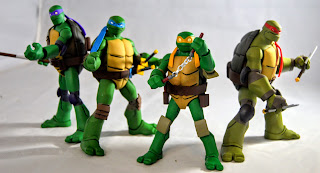 Sculpts of the Four look fantastic. These ooze with the personality of the assassin terrapins. The molds allow all sorts of poses without breaking the animation look. These are among the best designs I've seen from DC Collectibles. 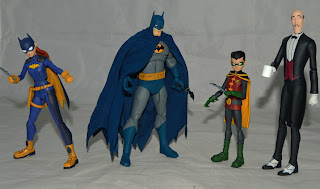 The DC Heroes aren't as impressive as the TMNT, but it's still an nice look, fresh from the animation.
Each comes with a ton of accessories from the cartoon, many are very small, so have a ziplock bag nearby for storage. 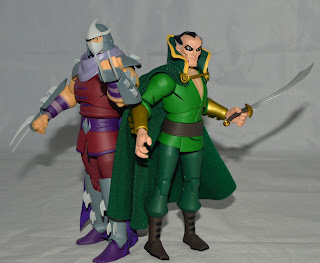 By far my favorite, Shredder has never looked better in the 30 years his existence. His cheese grater armor never looked more menacing. He's built like a linebacker.  Shredder is my favorite of the figures. Ra's doesn't fair as well. His hand doesn't like to hold his sword, and his head is too big for the neck balljoint. moving the figure at all sends his head rolling. 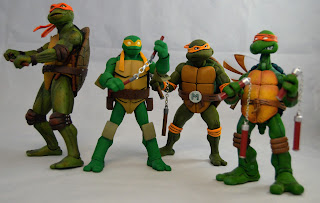 These scale well with other modern options of 6" action figures. 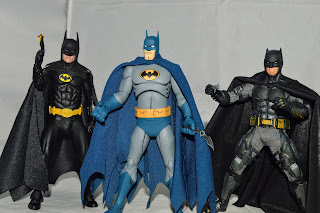 Batman stands tall among his contemporaries as well. 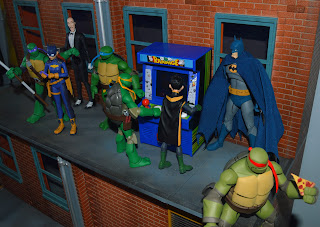 After a night defending the town, the two families hang out and enjoy a slice of pizza and
a game of battling mutated animals.